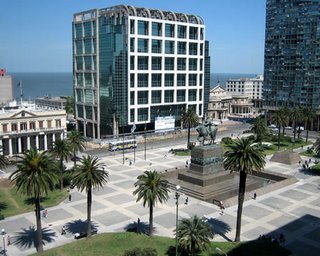 Plaza Independencia is located between the Centro (Downtown) and the Ciudad Vieja (Old City). Originally the site of a Spanish fort, and later the old city's market, it now commemorates Uruguay's national hero, José Gervasio Artigas, with a huge statue of the General on horseback. Around the plaza you'll find the ornate Palacio Salvo, the Radison hotel, the old gate to the city, and the Teatro Solís. The original La Pasiva restaurant is here. Tourist shops offer mate gourds, soccer jerseys, and full-size cowhides.

Comments:
La Pasiva is the best resturant ever!!! I am a native of uruguay but live in the states...when i go back that is my first stop