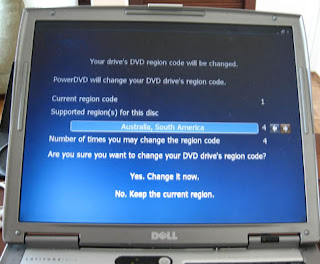 We joined a video club in Montevideo and had rented a few DVDs and watched them on our laptop, without problem. My daughter selected another movie recently and when we put it in the computer, it didn't play. Instead, a warning screen appeared saying she couldn't watch the movie since it was from the wrong region.

But, no problem, the screen would let us switch to Region 4 (Latin America and Australia) with the click of a button. But there was a catch-- a significant catch-- the region could only be changed 4 times and then our computer's DVD drive would be locked into that region. This meant that in less than a week, switching between DVDs we'd brought from the US and the local rental ones, we could cripple our computer forever.

At first I thought this was a Microsoft issue and that I could just download a patch to fix the region problem, but the restrictive code is built into the hardware (firmware) so patches are risky. I wondered if this would be another reason to buy an Apple computer, but Apple computers have the same problem.

This is a strange way to treat legitimate customers-- prevent them from using your product. Paranoia over piracy seems to have caused Hollywood to decide that all of its customers are criminals.

Is this a good business model? I don't think so. For me, it means we won't buy any DVDs for the rest of the year-- either from the US or from Uruguay. The Uruguay ones won't work when we move back to the US and the US ones won't work here.

Does it prevent piracy? No, not in the least. In fact it probably encourages it. It's easier and probably cheaper to buy pirated DVDs at the Feria Tristán Narvaja than it is to rent them at my neighborhood video store. Or just download anything using BitTorrent. By making it so hard for customers to watch movies legally, the companies create big incentives to become pirates.

Comments:
Chuck try http://www.videolan.org/vlc This player should solve your problems!

Chuck,
My brother sent me several legitimate DVDs from Brazil, which could not be played here in the States. He also wound up resorting to pirated copies (which work fine). Sad. More lost sales.

Man, that is such old news.They also have regions for VHS and will probably have them for anything in the future!Stick to the pirates they usually work on all regions.They cost about a buck in Asia.Cheaper than renting and you wont feel so bad throwing them away.Read up on DVD Jon for alittle background.

There are many reasons to switch to an Apple computer, but nope, this is not one of them. And you are right, it does not discourage piracy, but rather encourages it.

I think is possible to buy hacked multizone dvd players, in Uruguay.

Also it is possible to hack dvd drives in pc with software patches. Or to rip each dvd, and hack it (http://lifehacker.com/software/dvds/hack-attack-oneclick-dvd-rips-208866.php).

But yes, I think it's a lame measure to stop piracy.

There is a simple little application that resolves this problem. Load AnyDVD onto your computer, it will 'on the fly' remove the region code, so your PowerDVD player app will be able to play a DVD from ANY region at ANY time without you having to use one of your 4 region changes. AnyDVD has many other useful functions as well. Good luck.