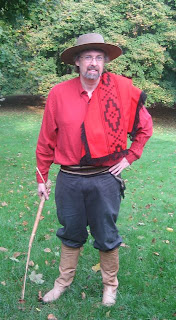 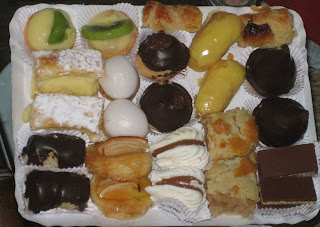 In Montevideo, it's never a long walk to a bakery. Some specialize in breads (panaderías) and others in pastries (confiterías). Las Gaviotas was our favorite bakery for masas finas [pastries]. They also made great cakes and apple strudel and it was the only place in Montevideo where we saw challah bread. Located on Avenida Brasil, two blocks up from the Rambla. 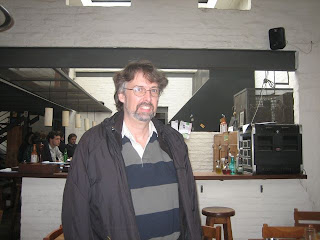 La Otra was our favorite parrilla. Nothing fancy: whitewashed walls, waiters in black T-shirts, paper placemats on simple wood tables. The focus was all on the carne, which led to my daughter's complaint, "all they serve is meat." Which was pretty much true: no pasta, no sandwiches, no dessert, no coffee.

There were about 8 different cuts of beef, 3 kinds of sausage, and a few other parts from the cow. If you couldn't grill it, they didn't serve it. Vegetables were also cooked on the embers: morrones [red bell pepper], boniatas [sweet potato], and papas al plomo [potatoes baked in foil].

Located on the corner of Tomás Diego and Perez, La Otra was very much our neighborhood parrilla and we ate there frequently. A friend of ours was an even more loyal customer-- he had eaten there every day during an earlier month-long stay in Montevideo. La Otra wasn't always perfect-- they could have "off" days. (El Palenque in the Mercado del Puerto, for example, was more consistent in terms of meat quality.) But, the imperfections were infrequent and on a typical night the food was unbeatable. 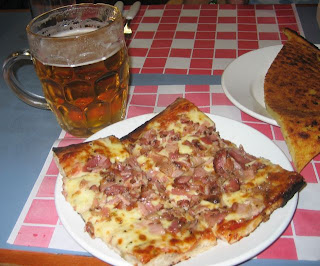 While I've posted frequently on food in Uruguay, I've neglected some of our favorite places to eat. Pizzeria Trouville was the first restaurant we ate at in Montevideo. It's located in Pocitos on 21 de Setiembre at Francisco Vidal. The atmosphere is nothing special, particularly inside under the harsh florescent lights, but the pizza is great and the servers are friendly and prices are very reasonable. I'd usually order a pizzetta con panceta [bacon pizza] with a chopp of beer. My wife preferred her pizza with morrones [red bell peppers], which was good, too. My daughter often had a sandwich caliente[grilled cheese and ham] or a pancho[hot dog]. I think we ate there more often than at any other restaurant in Monetvideo.

Back in Michigan, the pizza isn't shockingly different but the prices can be. My wife who had become accustomed to paying about 80 cents for her glass of vino blanco was startled to see her white wine in Kalamazoo cost six dollars (which was more than her entire meal at Pizzeria Trouville.) 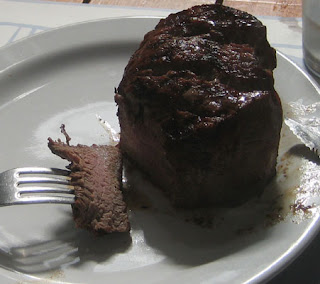 In Spanish, carne means meat and, in Uruguay, meat means beef. We ate many great meals in Uruguay, particularly carne cooked on the parrilla. At restaurants and at friends' homes, the beef was invariably delicious but when we tried to cook beef ourselves, we had trouble. I'd buy some nice looking steaks at the supermarket and they'd be too tough to eat because, despite how good they looked, they were really stew meat.

Eventually, I learned the names of several common cuts of meat. For a good steak, entrecot was a reliable choice. Picaña was another good steak: more expensive and more tender. Other cuts like colita de cuadril and asado need slower cooking and some cuts, like matambre, need to be boiled until tender.

At lunch one day, I found I wasn't the only one confused by beef names. By chance, I was seated next to a table of tourists from Spain who asked the waiter, "What is the colita de cuadril". Even before he responded, I knew his answer would be, "Es un tipo de carne." ["It's a type of meat."]

Here are some online resources that can help. Asado Argentina has a good post on Cuts of Beef for the Parrilla and the Cooking Diva includes photos and a video from her visit to a butcher shop in Buenos Aires. For excruciating detail, compare the Uruguay National Meat Institute's Meat Handbook (in English) to their Spanish version,Catálogo de Cortes.

update: Frigorifico Tacuarembó has a much easier to use illustration showing beef cuts in Spanish and English