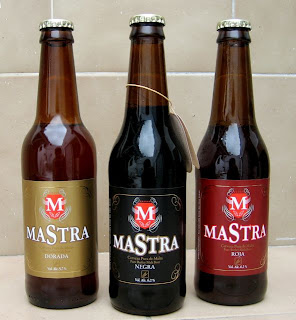 One thing I missed when I lived in Montevideo was the complex flavor of craft beers. I didn't have any complaints about Pilsen or Patricia but there wasn't much variety. After I returned to the US, a new microbrewery opened in Montevideo and when I visited this August I was able to taste their product.

Cervecería Artesanal del Uruguay brands its beer Mastra and they brew three varieties: dorada [gold], roja [red], and negra [black]. I enjoyed them. The negra is a thick, hearty traditional stout, as opposed to a dark-colored but relatively light-tasting beer like Pilsen Stout. The roja has a great malty taste; I could see it becoming my favorite. (I didn't have time to try the dorada.)

Is Uruguay ready for craft beers? No problem on the supply side-- these are high quality microbrews. On the demand side, it's questionable. Beer is certainly part of Uruguay's culture and I'm sure there are enough beer-drinkers with adventuresome tastes who would drink strongly flavored cervezas. The problem is the price. A small single-serving bottle (12 oz/355 ml) costs more than a liter of Patricia, which is going to make it hard to survive in the marketplace. It's tough to launch a super-premium product in an economically-stressed market. That said, Argentina has several microbreweries so it's possible this one could succeed in Uruguay by tapping into the tourist trade. I wish them luck.

I've been meaning to recommend A Small State of Mind for some time. It's written by Benjamin Gedan, a Fulbright scholar and journalist studying the Uruguayan media. I've been enjoying it for several months.

He writes on a broad array of Uruguayan topics from chivitos to supermodels to the dictatorship. He's also published articles about Uruguay in the New York Times