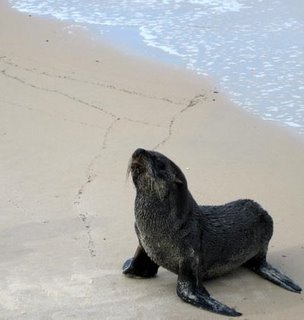 There was a young sea lion on the beach outside our apartment yesterday. Animal control officers were trying to catch it, or maybe chase it back to sea. When they got close to it, it would swim a few hundred feet down the beach. That went on for quite a while. The sea lion was still there a few hours later, but the animal control people were gone.

I'm pretty sure it was a South American Sea Lion. In Spanish they're called el leon marino or el lobo marino.

Comments:
Great pics. Your shots are really helping me to sell, this concept to the kids. Sea Lions, the Zoo,Rodeo, Beagles (their favorite), a clean beach in the city (have you seen the beach off the Malecon in Santo Domingo?), and especially the Cotton Candy.