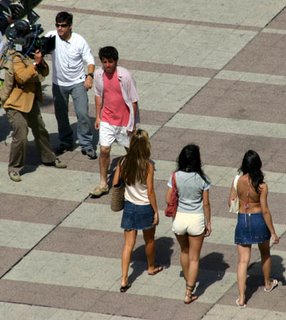 At first glance, this looks like a typical day on the Rambla outside our apartment. On a closer look the clothes aren't quite right, at least for this time of year. People are wearing shorts and bikinis on the beach, but they're back in jeans and sweaters by the time they reach the sidewalk. An even closer look, shows the movie camera filming the scene. Take after take after take, the same people walked past the same guys holding surfboards and the same bus pulled away from the curb-- only to back down the street a few moments later.

A stiltwalker appeared, towering above the actors. I thought he was part of the show, but it turned out he was just advertising a credit card. He moved down the block to act in the larger scene of everyday life in Montevideo.