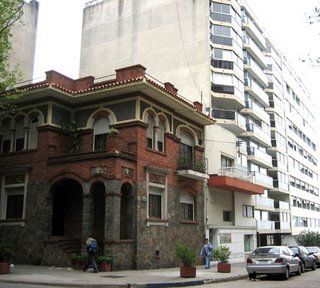 My neighborhood in Montevideo, Pocitos, is dominated by 10 story apartment buildings in the "Modern" or "International" style. There's no separation between buildings so together they form a solid wall of rectangular boxes for block after block. Architecturally, it's not very interesting.

There are still a few single family houses from early in the twentieth century. These have rich architectural detail: stained glass windows, colonnades, decorative ironwork, floral friezes, rusticated stonework, arches, cornices, and moldings in a wide variety of motifs. This must have been a beautiful neighborhood for a stroll. (See the Bello y Reborati blog for photos of many houses built by a local architectural team, with text in Spanish.)

I'm a bit conflicted over the loss of these beautiful homes, particularly since I live in one of the modern apartments. I don't know what kind of historical preservation movement, if any, exists in Uruguay. Given Montevideo's age, preservationists might concentrate on buildings from earlier centuries in the Ciudad Vieja. I just don't know.

The apartments do allow more people to live in this neighborhood, which creates the density to support all the local restaurants and shops. The increased density also reduces urban sprawl, since middle class families aren't off constructing houses in the suburbs.

There's one house remaining on our block. I enjoy seeing it when I walk past. It also opens the view from our kitchen window because we can see over the top of it. Otherwise, we would only see the bare concrete back walls of neighboring apartments.

Comments:
As far as I know, there is a rule that has been in force for the last fifteen years or so, establishing that no house may be demolished in any block where no other houses had already been demolished. That is why some single blocks of streets such as Tomás Diago, or Roque Graseras have been fully preserved, although they were not the nicest in the street. In the middle of Pocitos, you can find some streets very well preserved, such as the last few blocks of calle Martí. Maybe Santiago Vazquez is the nicest wholly preserved street.

It's a pity indeed that we have lost such beautiful houses, sometimes in neural points. But something has been done, as you see.

You may find some old pictures of Pocitos in the following address:

For a whole outlook of the old time city, you may see:

and there may be a lot of others, even older, like this: http://enlacesuruguayos.com/montevideo_antiguo.htm

I am a reader of your blog, and very much wish that you and your family may really enjoy our city.