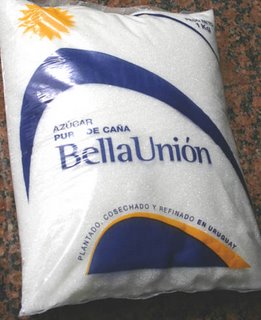 I bought a kilo bag of sugar at a street market yesterday priced at 19.90 pesos (just under $1). It was kind of a strange price since I haven't seen any .10 coins in Uruguay. The smallest seems to be .50 and even then prices are often rounded off to the nearest peso, so 19.90 is really 20 pesos. Later in the afternoon, I saw the same sugar at the Disco supermarket for 19.90 pesos. Disco also carried another brand, also priced at 19.90 pesos per kilo. Curious...

I asked myself, "does the Uruguayan government control the price of sugar?" Investigating a bit, I found the Tienda Inglesa website was offering Bella Union sugar at 19.50 per kilo. Close, but not identical pricing.

I asked a local economist about sugar in Uruguay and heard an interesting story. Bella Union sugar is a new brand, produced by a new government-owned sugar business. Their slogan is "planted, harvested, and refined in Uruguay." The other brand of sugar sold here is also Uruguayan.

Now Uruguay isn't really a tropical country. It's cold here in winter, usually above freezing, but still too cold for sugar. Apparently in northern Uruguay, near the Brazilian border, it's a bit warmer making it possible to grow sugar cane. Not necessarily desirable, but possible.

Brazil, on the other hand, is a very efficient producer of sugar. Efficient enough to produce fuel alcohol from sugar and still be a major sugar exporter. Since Brazil and Uruguay are both members of the Mercosur trading alliance, it would seem natural for Uruguay to import sugar from Brazil. But it doesn't. Uruguay blocks sugar imports.

As a result, sugar is expensive here-- even more expensive than the US which is infamous for sugar protectionism. (US barriers to sugar imports explain why Coke contains corn syrup in the US and why Michigan grows sugar beets.) In the US, sugar protection costs consumers billions of dollars. Uruguayan consumers bear similar costs. Free trade in agriculture could feed more people at lower cost, but politically it's difficult.

Gloria from Canada here. ABout that 10p coin.... I had to buy one once for a payphone call to a cell number and apparently the phone will only make calls with 10p coins but the farmacia I was sent to didn't have any nor did the newspaper store across the street. I cannot recall having one yet.

Interesting. Is it like our pennies? Not much use? I think that as the markets/groceries all round up or down your total to the nearest larger denomination it could be an example of what we North Americans could adopt. As it is the penny, though a nostalgic item, is not that very useful these days. They will ahve to phase it out eventually, ¿no?