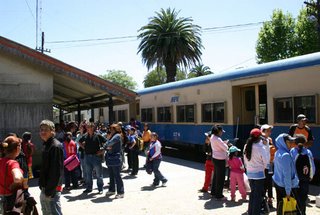 Passenger train service in Uruguay stopped about 30 years ago. The huge Central Station in Montevideo is empty, and has a beautiful, haunted ambiance. A couple of years ago, the government re-started train service on a limited basis. The new station is a few blocks away in a light-filled modern building.

The girls were in high spirits and sang team songs and banged improvised drums for the entire ride. We stopped at several towns picking up more players. We passed blooming orchards, vineyards, and a few eucalyptus groves. It wasn't really gaucho territory, but we did see some cows.

Canelones seems like a quiet town compared to Montevideo. The stadium was about a mile from the train station and we saw very little traffic. Local residents came outside to watch the soccer players parade past. There was a nice park near the stadium and, in the afternoon, it was full of people chatting and drinking mate, as Montevideans do on the Rambla.

We enjoyed the tournament. The girls played in the town stadium, playing half-court for the early rounds and full cancha for the later games. All the teams hung banners in their team colors on the fences and continued to sing team songs throughout the day. My daughter's team, Club Nacional, won one, lost one (on penalty kicks, after 2 periods without a score), and tied the final game (when time ran out.)

Here's a short video of the train trip.

Comments:
No passenger train service.Now that is some important info that I never read before anywhere!Thanks bruce

Uruguay does have passenger train service, but not throughout the country. There's a short line, maybe 60 kilometers or so, that heads north from Montevideo.