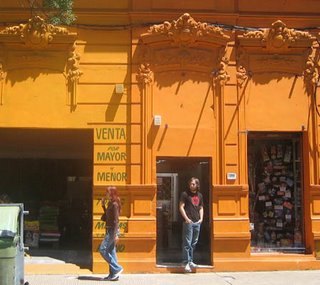 We went to Barrio Muñoz this morning to do a little shopping. It's a neighborhood full of shops selling all kinds of stuff-- mostly inexpensive products imported from China. It's said to have the lowest prices in Montevideo. Nearly all the stores were painted in bright colors and the streets were bustling with people. Most of the stores were very small but packed with a variety of products: kitchen gadgets, cameras, shoes, picture frames, appliances, vases, candles, beer mugs, plates, batteries, candy, Christmas lights, and more, all in a space about the size of my bedroom. A few stores were bigger, direct importers. I think the street vendors and small shops buy their goods there. We bought a hat & it was a fairly complicated process: first the sale had to be more than 100 pesos, then pay at a window and then wait (a while) for the hat to appear from upstairs (which seems to be a giant storeroom.) I get the feeling the neighborhood is a little problematic. A truck driver warned us to move our car, when we first parked because it would get robbed or the windows would be broken. We moved it. 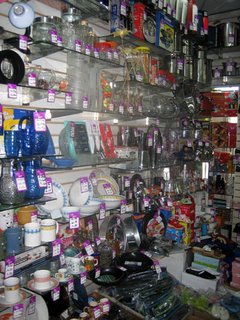 Comments:
So where´s a picture of the hat?

Chuck, is this located off 8 de Octubre near Tres Cruces? I have heard there is a lot of inexpensive shopping there.

Yes, pretty much. We parked near Justicia and Arenal Grand. There's a calle named Daniel Muñoz nearby. I imagine that's where the barrio gets its name.


anonymous-- the hat was just incidental to the trip. We were looking for picture frames.