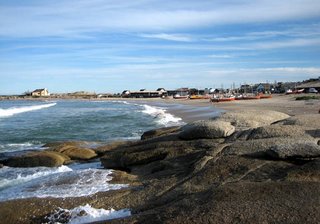 I'm back from 5 days at Punta del Diablo, a village on Uruguay's Atlantic coast not far from the Brazilian border. It's a 4 hour drive from Montevideo, not counting stops. We passed the beach towns I visited earlier and continued through the open countryside. There were rolling green hills, dotted with cows and horses. In places, it could look like the Midwest, if it weren’t for the ñandu alongside the grazing cattle. A ñandu is a South American ostrich, or rhea. Palm trees, and gauchos on horseback, emphasized that we weren’t in Iowa.

Punta del Diablo is a fishing village in a setting so beautiful that it’s hard to describe. I complained that my Spanish vocabulary was too limited, but I’m not sure I can do it justice in English either. I did take a lot of photos and will put some online in the next few days.

Punta del Diablo has two main beaches, framed by huge rocks sculpted by the sea. One beach is for the fishing boats and the other is favored by surfers. Vendors sell necklaces made of shark vertebrae from a pier along the fishing beach. There are a few little stores, restaurants, and hotels but no big commercial operations. Many of the rental places are 4 small houses on a single lot. Summer is the busy season when the ranchos and casitas fill with people getting away from the city. It's spring, now, and much quieter. In winter, there are very few people there.

I went with Tito and 3 friends. We walked on the beach, enjoyed great camaraderie, and ate like kings. I had a great time.

Comments:
how awsome!
iam form uruguay, but i live in chicago, usa...
i am planig to go back to my "paisito" for good and iam looking for a "casita in punta del diablo... that is how i just found your blog!!! great pics!!
nibia./