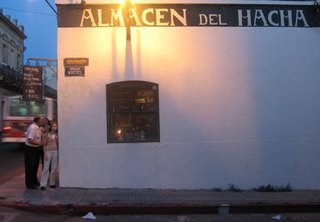 The Almacén del Hacha is a restaurant with a history in the Ciudad Vieja. They say it's the oldest bar in Montevideo. The exact date of its opening is unknown but it was sometime before 1794. It's been commemorated on a Uruguayan postage stamp and it's featured by the government's historic bar commission: Bares y almacenes con historia.

My Father-in-law lived a few houses up the street several decades ago. In that time, the building had two parts: the bar and the almacén [store]. The bar sold grappa and caña and customers played truco. As a boy, he'd go to the almacén for a refuerzo de a vinten [a sandwich that cost 2 centavos]-- bread with a very thin slice of mortadella. If he had 5 centavos, they offered another sandwich with more meat. 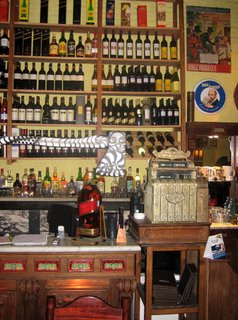 El hacha means the axe and the name comes from an infamous crime committed during the 18th century. On April 15, 1794, an employee named Bernardo Paniagua was killed during a robbery. The weapon? An axe. The murderer was captured in Argentina and hung in Uruguay. For over 200 years, people have referred to it as the "esquina del hacha".


Today, it's a very nice restaurant decorated with historic artifacts: an antique cash register, a Victrola gramophone, a waist-high mortar, tango posters, beer advertisements, photos of the Montevideo, and more. We had a great dinner there last night and we ate a lot. The entradas were so good that we could have skipped the main course. I particularly liked the jamon serrano, the spicy potatoes, and the choriso sausage cooked in white wine. My plato principal was entrecot en salsa Tannat (steak with a red wine sauce); very nice. I didn't have room for dessert. 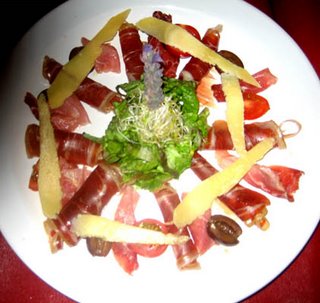 It's located at Calle Buenos Aires 202 (esquina Maciel). Telephone:915-2823 There's parking across the street; a waiter will unlock the gate,if you ask.

You have a great blog! Congratulations!

I´m very glad as an uruguayan and montevidean, that you take a time to write and share many interesting points and things of our culture.