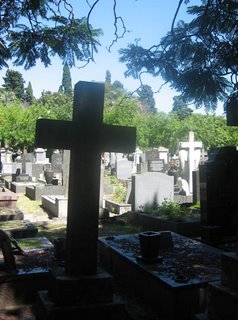 The British Cemetery is in the Buceo neighborhood of Montevideo, next to the much larger Cementario del Buceo. We went to pay our respects to my wife's grandparents who are buried there. A tall obelisk with the royal crest and a marble bust of Queen Victoria sets the tone: very proper, ornate in places, and a bit antiquated. The grave markers testify to the strong British influence in Uruguay in the nineteenth century.

Not all of the engravings are in English. There are some in Spanish, of course, but also many in Hebrew and in German. US military influence in the 19th century is suggested by graves of sailors from the USS Ticonderoga and the USS Germantown.