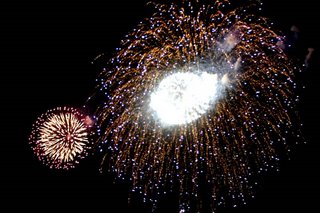 La Noche de las Luces kicks off the holiday season in Montevideo. They'd been preparing for days: burn the grass on the point, set up the mortars, bring in the food stands, and fence off the launch area. People started gathering mid-afternoon for the fireworks at 10 pm. A policeman estimated 400,000 people would come. That's nearly a third of the city or more than 10% of Uruguay's population. People drank mate and beer, bought peanuts, chips, and cotton candy from street vendors, waded in the Rio, played soccer, and listened to music from speakers all along the beach. By dark, it was really crowded. The fireworks were great-- one of the best shows I've ever seen.