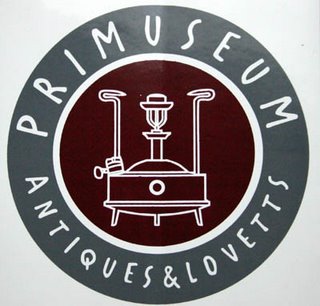 I had lunch today in a beautifully restored building in Montevideo's Ciudad Vieja that houses my host's collection of Primus stoves, lanterns, and torches. Primus is a Swedish company that's been making portable stoves and selling them worldwide for over a century. I was familiar with them from backpacking trips in high school. Apparently these stoves were typical kitchen appliances in Montevideo in the twentieth century. 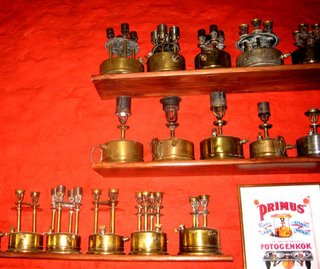 The building is fully equipped with a parrilla, a separate kitchen, a marble bar, and tables for plenty of friends. Carlos Gardel photos hang over the upright piano and Gardel's tango recordings play on the sound system. There's an antique cash register on the bar, shelves of antique milk bottles, an icebox built for real blocks of ice, ceramic beer bottles from defunct Montevideo breweries, old tins for mate, and much more. 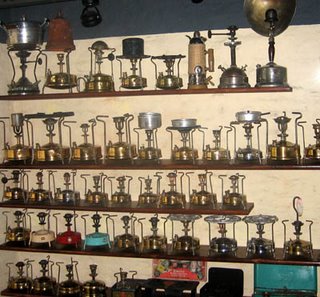 Lunch was wonderful: three types of sausage followed by matambre de cerdo and colita de cuadril from the parrilla. Once again, I was quite impressed by the generosity and hospitality of the people of Uruguay.

Comments:
The bldg and restaurant have been for sale for at least 6 months.Listed at Bien Seguro under outstanding properties.They will not quote a price on the net.
There are many pictures of the property,worth seeing on the R.E. site.b