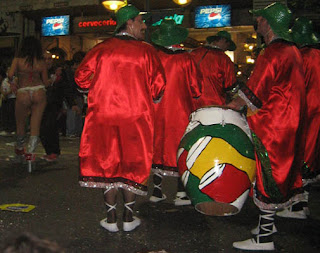 We enjoyed the opening parade of Montevideo's carnaval last night. It started around nine and lasted longer than we did. We left after midnight, but our cabdriver said the parade would go until 2 am, or so. It looked like most of the crowd was staying for the whole show.

The parade started with the queens of carnaval and the queens of the llamadas riding on floats. Trucks advertizing Coke and Antel (the national phone company) followed. Marchers carried large horizontal banners featuring various sponsors and kids from the audience would lay down in the street so the banners would pass over them. It was fun seeing the murga groups in their elaborate costumes but the parade wasn't really the best forum for their singing. Some rock bands played amplified music from the top of trucks. The candombe drum troupes were the most exciting.

During the long spaces between groups, kids sprayed each other with foam from aerosol cans and threw confetti. The kids also sprayed foam on the floats and on the scantily-clad dancers. Performers later in the night fared better since the kids had depleted most of their ammunition.

See my video of the Desfile Inaugural.

From Uruguay has a nice post on last year's opening parade.