A day in Piriápolis 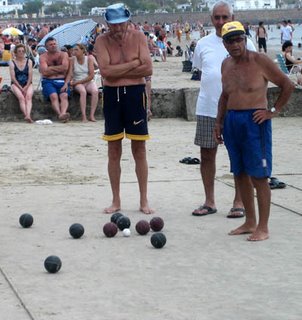 Everyone seems to escape Montevideo during January. We decided to take a mini-vacation (one-night) up the coast at Piriápolis. The day was overcast, but the Piriápolis beach was full of people playing soccer, drinking mate, and chatting. There were a few games of bocce ball and more people were playing a related game called tejos, which uses wooden discs instead of balls. Not many people were in the water, but it was a cool afternoon. There were a lot of jellyfish washed up on the sand.

Piriápolis is a nice enough place, but a bit faded. I think Punta del Este took its glamour and wealth. Restaurants and gift shops line the street across from the beach and the sidewalks are full of vacationers. It reminded me of some of the beach towns in Florida south of Fort Lauderdale.