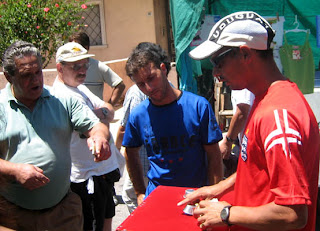 Each time I've been to the Feria Tristán Narvaja, I've seen people operating the shell game. It's played with three cups and a small ball and it looks like gambling but really it's just a con.

in the hands of a skilled operator, it is not possible for the game to be won, unless the operator wants the player to win.

When someone not familiar with the shell game encounters a game on the streets, it appears that bets are being placed by numerous players, when in reality, most of the persons standing around a game are in league with the operator in a confidence gang. Shell game gangs generally prefer to swindle one player/victim at a time. The apparent players serve various roles in the swindle: they act as lookouts for the police; "muscle" to intimidate victims who become unruly and some are shills, whose job is to pretend to play the game, and entice the player/victim into betting. Once a player/victim enters the circle of apparent players and faces the operator, the gang surrounds him/her to discourage an easy exit and to keep other pedestrians from entering and disrupting the bunko gang's action on the main player (victim). The job of crowding around also protects the operator from any incriminating photographs being taken of the act. The operator and the shills will try to get the victim into a heightened state of anger or greed. Once this is accomplished, one shill will pretend to disclose a winning strategy to the victim. It is all a ruse to get the victim to place a large bet.
quoted from Wikipedia

I tried to take a video of the shell game because it's fascinating to watch the movement, but the "players" [shills] all started shouting at me. Instead, watch this Penn and Teller video to see why this "game" is impossible to win.