An evening in Montevideo 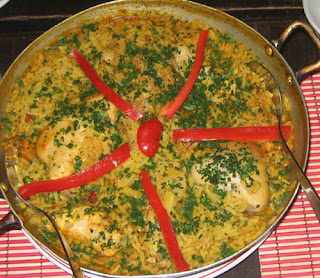 The waiter's pronunciation of paella ("ll"="y" instead of the Uruguayan "zh") confirmed we were in the right place. We were looking for Basque food and had met friends at the Cantina Vasqua in Montevideo's downtown (San Jose 1168). From the outside, it's inconspicuous, marked with just a small sign, but the ample stained-glass picture at the top of the flight of stairs is welcoming. The menu features pork, chicken, and fish-- without much beef-- which is somewhat unusual in Uruguay. We enjoyed our meal and spent a few hours chatting over, and after, dinner. It was nearly midnight when we left, and we figured that the evening had come to a pleasant end.

The drive home added two events to our agenda. First, we heard the drums of a candombe troupe and circled the block so we could park and watch them. (Here's a video). After that, we saw people getting an early start on Iemanja at Playa Ramírez. Montevideo is an interesting place to live.

Comments:
Hello Chuck, I just want to say thank you for this wonderful blog!
Having been away from Montevideo for over 14 years it was a real treat going thru your posts, pictures and videos. Thank you again and keep'em coming!