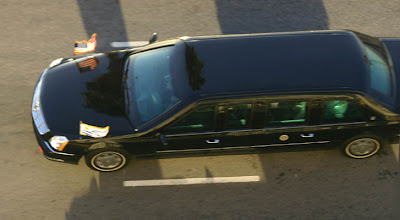 Bush is leaving Uruguay as I type this. My wife counted 65 vehicles in his motorcade as it passed our apartment this morning, not including the helicopter flying overhead or the two speedboats racing along the Rio. Traffic on the Rambla was closed for hours, both for Bush's arrival and for his departure.

Bush was fairly well-received in Uruguay. In my neighborhood, people lined the sidewalks to watch him arrive. Most were simply curious to see "the most powerful man in the world" & didn't seem to be politically motivated one way or the other. There were protests downtown with Bush burned in effigy and McDonald's windows being smashed. (Some Uruguayans blamed the vandalism on Argentine agitators.) Uruguayans give Bush substantial credit for US financial assistance during Uruguay's 2002 economic crisis.

The meetings between Bush and Uruguay's president, Tabaré Vázquez, seemed very amiable but nothing of substance was announced. The two presidents ate parrilla de cordero (grilled lamb) at Vázquez's estancia. Bush brought a complete barbecue set as a gift to Uruguay's president. Vázquez's gifts to Bush included a gaucho belt and boots. As Bush left, he reportedly said to Vázquez, "If you need any help, grab the phone and call me."

Comments:
I found in my genealogical research that George W. Bush is our 9th cousin. You could have said hello when he visited town.