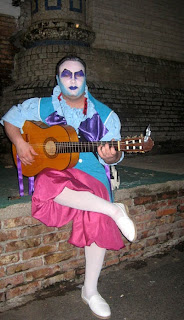 101 years ago, a group from Cádiz, España named "La Gaditana" spent a year performing in Uruguay because they didn't have enough money to return to Europe. The next year, a local group called "Murga La Gaditana que se va" ["La Gaditana That Went"] parodied them and Uruguay's tradition of murga was born.

The music diverged over the years but recently groups from Uruguay have performed in Cadiz and Spanish groups have performed in Montevideo. Araka la Kana won first place comparsa in this year's carnival in Cadiz.

We saw them at the Semana Criolla. Here's a video from Araka la Kana's performance:


On a somewhat related note: The Miami Herald recently ran an article on murga in Uruguay.

Comments:
Is this video of the uruguayan "Araca la Cana" or the spaniard Araka la Kana? They sound uruguayan but you spelt their name with a "K" which makes me think they are from Spain?

yeah, it puzzles me too. The locals are "Araca la cana". Nice post though!

I didn't know the origins of uruguayan murga myself.

This was the Spanish group Araka la Kana who played in Montevideo Monday night.

This afternoon (Wednesday) I heard an announcement that the two murga groups with the same name were going to perform Araka la Kana (from Spain) and Araca la Cana (from Uruguay) tonight, but I couldn't stay to see them.

Wow. It's amazing hoy you are describing all the popular things of Uruguay.
Now I've discovered this site, I will visit this blog more often.

The influence of "murga" can be traced nack to the original inhabitants of Montevideo; 24 families from the Canary Islands in Spain back in 1774.
To my taste uruguayan murga has developed into a more theatrical,ritcher form of expression. Spanish murga does not incorporate our African influences making it a more boring proposition.
I am still trying to download a full act by "asaltantes con patente". does anyone know where i should go?
great blog chuck!
your ossie-uruguayan friend

Yeah, I didn't know where murga came from either... Now, I wonder where the name "araca la cana" came from... because I always thought that that was pure uruguayan slang which meant "watch out for the police" and that is why during the military coup in the 70's they had to change their name to "Murga america" if I remember correctly... but now that we know there is a Spanich Araka la kana I'm wondering which one came first... and I'm also wondering if araca la cana means the same in Spain as in Uruguay....
Anybody?