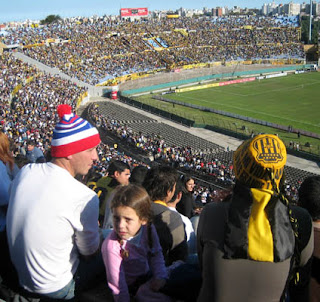 Peñarol vs. Nacional is the classic soccer rivalry in Uruguay. We watched them compete this afternoon in Montevideo's Estadio Centenario. The game was a lopsided Peñarol victory, but to me the most interesting action happened in the stands.

Peñarol's hinchada, [hardcore fans] all dressed in their team's yellow and black occupied one end of the stadium. Nacional fans-- red, white, and blue-- were at the opposite end. Fans displayed their loyalties through banners, fireworks, flags, non-stop chanting and singing, whistles, highway flares, and smoke bombs (with smoke in the team colors).

Our seats were in the center section which was more peaceful. The fans still followed the game closely, swore at the referees, threw confetti, and cheered each successful move by their players (and each mishap of their rivals), but they didn't take the slogans "Peñarol until death" and "Nacional until death" quite as seriously. Family members could even cheer for rival teams.

We'd been warned that violence wasn't uncommon between the hinchadas. While we didn't see any clashes inside the stadium, after the game a Peñarol fan was being chased and hit by a large group of Nacional fans. A squad of mounted policemen rode over to quell the disturbance.

Comments:
Great game, and great photo CS! (I think we were about 20 rows in front of you!)What a treat to go to 'the classic'! In case you or any of our pals here in town are interested, I'll commentating the Nacional game against Mexico, and we could all sit together--if you think that game was crazy, wait til you see all the fans of Uruguay unite to cheer on Nacional in the Copa Libertadores. And, a night game gives extra ooomph to the flares and fireworks!