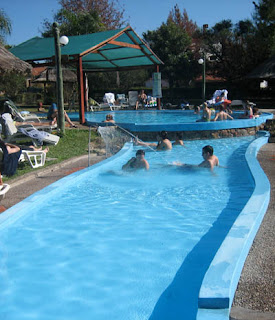 The Posada del Siglo XIX is a resort near the city of Salto (in the departmento of Salto) about 5 hours from Montevideo. We enjoyed our weekend there but it seemed very pricey. To be fair, a spa in the US would have been much more expensive. (And our friends told us their weeknight rates were substantially cheaper.)

Siglo XIX is one of several hotels in the termas de Daymán featuring geothermal hot pools. Some termas also sell daypasses. The water is naturally hot and the pools are manmade. One guidebook said the water source was found accidentally while drilling for oil. At Siglo XIX, there are several outdoor pools and a large covered pool and various hot tubs and spas plus a kids area with water slides. In the morning it was cold enough to form frost on the grass and the steam rising from the pools was very atmospheric. The pools themselves were very relaxing.

Comments:
Looks lovely! When you say it is expensive, just what kind of money are we talking about?

We paid $150 US per night for four people which was much higher than other rates I'd heard. I think there was a holiday in Argentina which made it "high season."

The hotel was really full and they didn't want to give us a reservation but when we said we didn't have any flexibility because we had a US visitor who was leaving Uruguay they made a space for us.

If we had booked earlier I think we could have had a room for about a third the price.