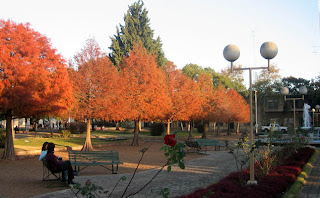 Salto is a pleasant city of 100,000 inhabitants on the bank of the Rio Uruguay, about 500 kilometers from Montevideo. It's the capital of the departamento of Salto. A bridge built on top of a dam connects Salto to Concordia, Argentina.

We didn't spend much time there but we enjoyed a short walk in a park along the river. Recent flooding left part of their riverside drive underwater. Salto has several nice parks and plazas, including Plaza Artigas (where this photo was taken.)