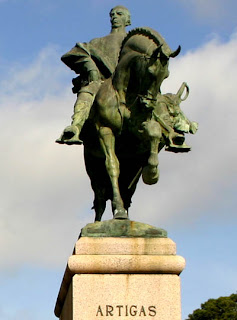 Today was a national holiday in Uruguay celebrating the birthday of José Gervasio Artigas. Artigas was born in Montevideo on June 19, 1764 and he led the 1811 fight for independence from Spain. His victory against Spanish troops in the battle of Las Piedras was an important first step towards nationhood for Uruguay. The path wasn't straightforward, since Portugal and then Brazil ruled the territory after Spain withdrew. At the time Uruguay became independent, Artigas was living in Paraguay, where he died in 1850. Despite never being president of Uruguay, Artigas is Uruguay's national hero.

Artigas is commemorated in Montevideo's Plaza Independencia. Statues of Artigas are common in buildings and plazas throughout Uruguay. [The statue in the photo is in Paysandu.]

School was out today and government offices were closed.