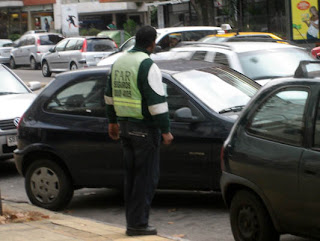 Cuidacoches are very common in Montevideo. I think it's the combination of low levels of employment and high levels of petty theft. Cuidacoches watch the cars parked on a particular block in exchange for a small tip (5-10 pesos, 20-40 cents) from the car owners. They frequently help drivers pull into or out of parking spots. The same cuidacoche works the same street every day, like a regular job. Some of them sleep on the streets, as well.

Comments:
Is there an equivalent to homeless shelters and/or other support for the very poor?

I'm not sure what kind of social services exist for Uruguay's poor.

i remember there once was that fake comic politic candidate one, pinchinatti or something like that, in Uruguay. He even used to make fake/comic politic meetings. It was made by the comic actor called Ricardo Espalted IIRC.

Anyway, I remember that one of his gags was promoting the exports of the "cuidacoches", since we had plenty, and no other country seem to have them.

Anyway, fun aside, I guess that like many things, this phenomenon has multiple faces:
a) In a couple of places I park, they even wash your car for $U40 or something. The cuidacoches there seems ok, .
b) Sometimes, the cuidacoches might be "in partnership" with the bad guys: so, they will help them find the best "deals" since they can look at your car closely when they go walking by, and they are never to be found after the bad guys break your window. There no Service Level Agreement with the cuidacoches, you know... That happened to me once in front of an office in Ciudad Vieja at about 18hs and I've heard the same thing happening to other people.