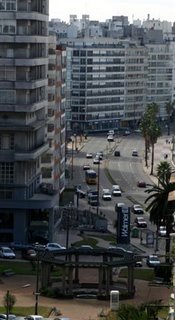 The Rambla is an avenue that runs along the waterfront of Montevideo. One side is lined with apartments while the ocean side has a wide sidewalk & bike path with parks and beaches. It's a popular place for a walk. There are soccer fields where winter play has worn away all the grass.

Because the Rambla is so long, each section has a more specific name: La Rambla Mahatma Gandhi, La Rambla Francia, La Rambla Presidente Wilson. Our apartment, assuming it comes through as planned, will be on La Rambla Peru. 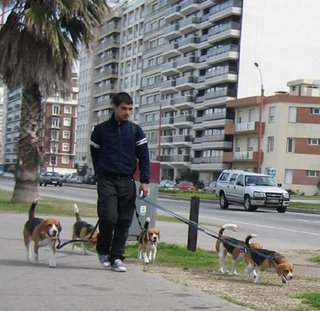 There are lots of dogs in the neighborhood where we are staying, enough to keep professional dog-walkers in business. The dogs are well-behaved and don't bark or lunge at passersby. The absence of pooper-scooper laws mean you need to watch where you step.

Market in the park 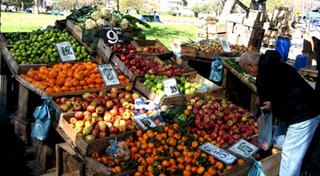 Farmers' markets operate in different parts of the city on different days. Sometimes they close a street to traffic; this one was in a neighborhood park. Some of the produce is local, but there are tropical fruits as well. This market had several cheese and sausage vendors and a few fish mongers, including one selling whole sharks. We didn't buy anything since we thought we'd be moving into an apartment soon. That plan has hit a snag. Anyway the market was interesting. 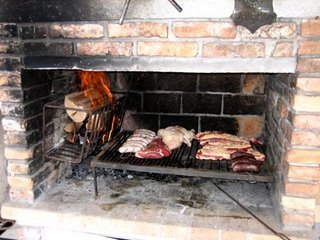 I'd been somewhat mystified by the grills used in Uruguay; they're quite different than my Weber at home. The food has been consistently delicious but the process was a bit confusing.

It turns out to be quite simple, as Tito demonstrated for me on his parrilla this weekend. As the logs burn, (in the firebox on the left) coals drop onto the brick floor of the parrilla. Tito then uses a poker to spread the coals under the grate holding the food. Fewer coals (on the right side of the grill) keep the temperature lower for slow cooking. Closer to the fire, it's hotter. The grate can also be angled upward for more temperature control. New logs in the firebox replenish the supply of hot coals, so extended cooking is straightforward. Potatoes go on top of the grill wrapped in foil and sweet potatoes go directly into the coals under the fire. Everything tastes great.

No longer a mystery, but an art. 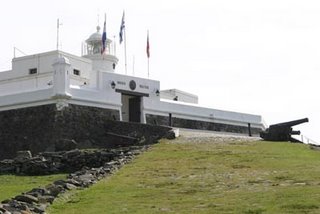 El Cerro is a hill across the harbor. There's an old fort on top that is now a military museum. 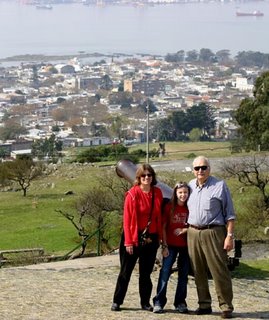 We visited it Friday. The views are great. 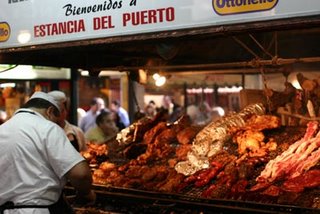 Good food in huge quantities. The Mercado del Puerto is a lively place, across from the port, full of parrillada restaurants. 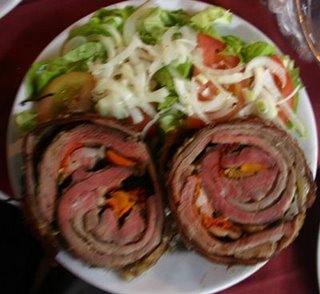 I had the matambre: "death to hunger." My hunger was killed. Delicious.

Here's an online recipe for matambre.

An interesting thing about flying South is the absence of jet lag. While the flight to Uruguay is substantially longer than a transatlantic flight, there's no change in time zones. Well, no big change: Montevideo is one time zone east of Eastern Daylight time.

The overnight flight is tiring, but it's not like landing in Europe or Asia and being out-of-synch for a few days. No jet lag. 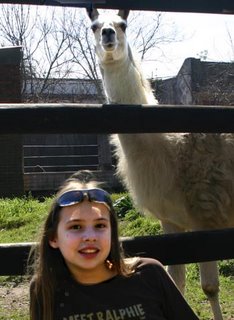 Yesterday morning we went to the zoo. Admission was cheap for adults-- 20 pesos (less than $1)-- and free for kids. It was pretty quiet on a school day during the winter, although it was a beautiful morning.

The zoo has a good selection of animals. We enjoyed watching a little monkey trying to smash an orange against a barrel to break through the peel. A huge hippo was sprawled out sunbathing. The giraffes were rubbing necks over the top of their enclosures. The lions were sleeping, which seems to be their default mode everywhere. 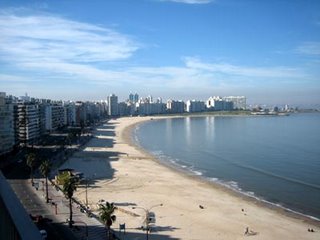 Here's a great view: Pocitos beach from an apartment we looked at this afternoon. 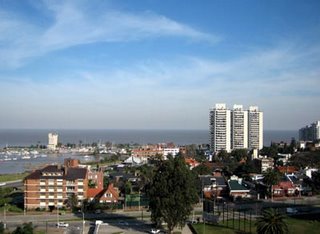 We've been looking at apartments. This is the view of the Rio de la Plata from one of the modern towers. Great vista, but the apartment was a little small for us. We may give up the view for a more comfortable place. 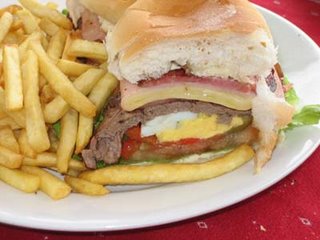 A chivito is a popular dish in Montevideo. It's a steak sandwich with cheese, ham, bacon, olives, lettuce, tomato, mayo, and a fried egg. I ate this one today at Che Montevideo, a nice restaurant with a great view of the Rio de la Plata. 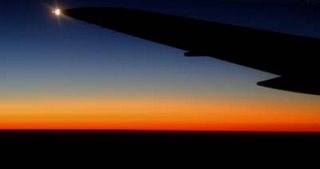 We were somewhere mid-continent as dawn broke. 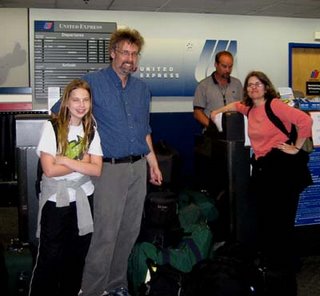 Here we are checking our luggage at the Kalamazoo airport-- 6 bags plus assorted carry-ons. United Airlines allows 100 pounds of baggage per person. Thankfully we were well under that limit.

Are we there yet?

South America is much bigger than many people realize. And Montevideo isn't particularly far South; it's another 1500 miles South to Tierra Del Fuego. But, Montevideo is over 3000 miles south of Caracas, Venezuela

We leave this afternoon for our 22 hour flight to Montevideo. From Kalamazoo, it's four flights: Kalamazoo-Chicago, Chicago-D.C., D.C.-Buenos Aires, Buenos Aires-Montevideo. 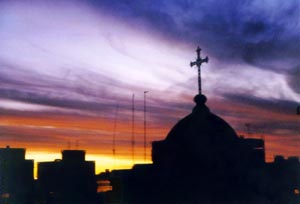 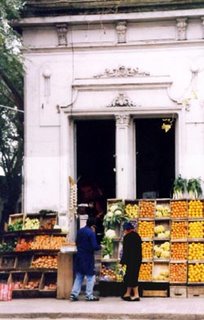 Some photos from my previous trip (1998)

Several friends have asked me what Uruguay is like. I haven't had a concise answer for them.

Culturally, Uruguay and Argentina are similar. They grill beef and drink mate. French fries are a common sidedish. Dinner is late-- after 10 pm. You can drink the water. Wine and beer are more common than rum, tequila, or aguardiente. Afternoon tea is popular.

Uruguay has winter-- although it's more like winter in New Orleans than Kalamazoo. The Atlantic Ocean tempers the weather-- both winter and summer are fairly mild. The coast is pretty, with a regionally famous beach at Punta del Este. We didn't travel to the interior on our last visit, although it's possible to stay at ranches and watch the gauchos in action.

We'll see if my description changes during this trip. It looks like we're going to leave Michigan on August 18.