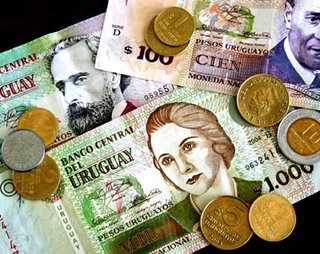 Uruguay’s currency is the peso. Today a US dollar buys just over 23 pesos. When we were here 8 years ago, a dollar only bought 10 pesos. The rapid depreciation of Uruguay’s peso occurred during 2002, as part of a larger economic crisis. Prices, for visitors, are much cheaper now, but the national economy has not fully recovered.

There is some dollarization here, but most everyday items are in pesos. The rent on our apartment is quoted in US dollars, but the gastos comunes (similar to condominium fees) are in pesos. Expensive items like a computer printer will be priced in US dollars but ink refills for the printer are priced in pesos. ATM withdrawals can be made in dollars or in pesos. Sometimes this gets confusing, particularly since the $ is used to indicate pesos, while the dollar is noted by U$S.

Currency fluctuations can cause substantial differences in prices across countries. This leads to some complications when looking at income statistics. Uruguay’s per capita national income is $3,900 US dollars at the current exchange rate. (Roughly 1/10 the US per capita GDP.) When price differences are taken into consideration, Uruguay’s per capita income is $9600 (purchasing power parity) which is significantly higher.