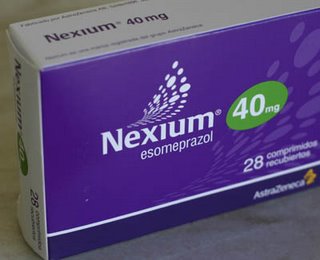 Nexium is probably best known for its purposively uninformative advertisements. The ads weren't misleading, but the only information in them was the color of the pill (purple). They didn't say anything about what the medication could do or what symptons it could treat, just "ask your doctor..." (See this story on marketing Nexium.) (Another article discusses their broader marketing strategy.)
I take these pills for acid reflux.

In the US, it's a prescription medicine and I was afraid I'd have trouble refilling it in Urugay. No problem; it's an over-the-counter drug here, so I was easily able to buy it. And it was much cheaper here than in the US. A month's supply of Nexium costs about $50 here compared to $200 in Michigan.

A 400% price difference is enough to interest an economist.

Cost differences between Uruguay and the US can't explain the difference because Nexium is produced by AstraZeneca, a Swedish multinational pharmaceutical firm with headquarters in London. Their principal manufacturing facilities are in rich industrialized countries-- Western Europe, USA, Japan, Australia-- with roughly comparable costs.

The price differential must come from differences on the demand side of the market. The US is richer than Uruguay, and its consumers have a higher ability to pay. Charging a higher price in the US and a lower price in Uruguay gives the firm higher profits than charging the same price in both countries. This practice is known as price discrimination. Price discrimination only works if a firm has monopoly power, which AstraZeneca has through its international patents. The other factor needed for successful price discrimination is the ability to prevent re-selling between separate market segments. This is why the pharmacuetical industry fights so hard against drug imports.

Another relevant economic concept is the principal-agent problem. When someone else pays the bills, the decision-maker is less likely to be sensitive to price. In the US, my physician prescribed Nexium, because he believed it would be effective. (And it was.) But, of course, the doctor didn't have to pay for the medication. (First principal-agent problem.) Because I have health insurance that covers a substantial part of my prescription medication, I also don't pay the full cost. (Second principal-agent problem.) If had to pay the full $200 cost for Nexium in the US, I'd probably ask my doctor if Prilosec, or another inexpensive substitute, would work for me. Because of the insurance, I pay less for the expensive Nexium in the US than I pay for the much cheaper Nexium in Uruguay.