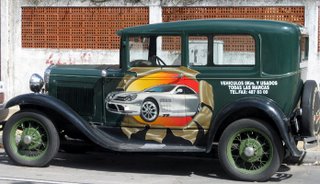 Uruguay has something of a reputation for classic cars. For years, vintage cars were used as everyday transportation. Most cars today are modern small cars-- Fiats, Citroens, Peugeots, Fords, Kias, Subarus, Hyundais, etc. The original VW beetle is fairly common. Many of the models aren't sold in the US-- subcompacts like the Cheverolet Corsa or Ford Ka. The police cars are small. The taxis are small. There are a few SUVs, but I would see more SUVs parked at the gym in Michigan than I see a in week here. A Honda Accord looks like a big luxury car compared to the typical cars on the road.

There still are some older cars on the street. Some are fully restored and advertise businesses. Some are in private collections. Others are just regular cars. I've seen several big US cars from the 1950s modified with roof racks so they can haul large items. Some of the most impressive vehicles are the old trucks used for the farmers' markets. Some look like they've been in use since WWII.


If you're interested, here's an album of my Montevideo car photos. These earlier posts are related: older car photos, some articles on antique cars in Uruguay

Comments:
hello I am of uruguay, see you movie in the youtube and I have met your page, my family came from
spain and italy ,as almost the whole population.uruguay is for my and the world (no USA (manipulados por UK)USA es UK) a Patrimony of the humanity. Because there have coexisted the majority of European countries throughout 150 years aprox.