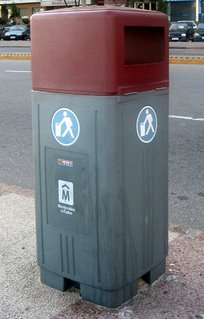 These trash cans are placed at regular intervals on the broad sidewalk between the Rambla and Pocitos beach and Buceo harbor in Montevideo, Uruguay. As trash cans go, I think they are rather handsome. People do seem to use them, although there is still litter on the beaches to be cleaned up by the city crew.

There is a problem with the design-- not the style, but the material. The plastic isn't heat resistant, or at least it isn't fireproof. I'm not sure if the fire comes from cigarettes accidently discarded in bins full of paper, or if the fire comes from deliberate vandalism, but as you can see in the second photo, the side of a bin melted, leaving a big hole. 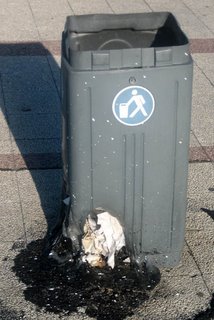 This trash bin is still in service, and people continue to use it. Despite the hole, it more or less functions as intended. 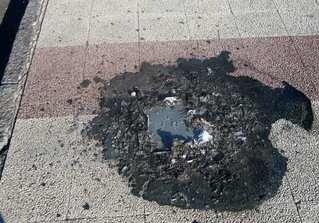 This one doesn't. This is all that's left of a trash bin that completely melted. At first, I didn't even recognize what it had been.