Globalization in a Box 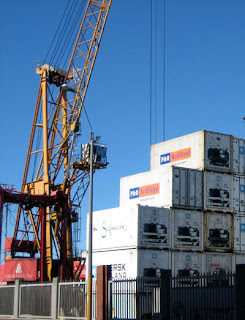 I associate the port of Montevideo with grilled meats, but it is a working port. Stacks of containers tower over the Rambla and the Río. From my apartment, I can almost always see a few big containerships waiting for a berth.

I just finished reading a book by Marc Levinson, The Box: How the Shipping Container Made the World Smaller and the World Economy Bigger, which argues that containerization made globalization possible.

"Barbie was conceived as the all-American girl. In truth, she never was... Workers in China produced her statuesque figure, using molds from the United States and other machines from Japan and Europe. Her nylon hair was Japanese, the plastic in her body from Taiwan, the pigments American, the cotton clothing from China. Barbie, simple girl though she is, had developed her very own global supply chain. Supply chains like Barbie's are a direct result of the changes wrought by the rise of container shipping."

While shipping containers don't have the same glamour as high-tech electronics, their impact on the world economy has been as big.
(If you're interested, Princeton University Press presents the first chapter of The Box free.)

Containerization could help Montevideo, but it's not a sure thing. Montevideo's port is deeper and closer to the ocean than the port in Buenos Aires. Uruguay would like it to be the center of regional shipping.
From theADMINISTRACIÓN NACIONAL DE PUERTOS website:

"The Port of Montevideo is located on the River Plate, and geographically positioned as the main cargo transport route of Mercosur. It has become an axis of integration for the region, due to its immersion in the area of influence of almost 200 million inhabitants with the highest per capita income of Latin America.

Since very early in its inception, the Port of Montevideo has played a key role in the country and region's development. Because of its excellent location, its competitive advantages in terms of natural characteristics and infrastructure, its services and investment opportunities, it has become a necessary reference in commercial routes."

The economics of ocean shipping have been changing in favor of mega-ports, which may limit the growth of Montevideo's port. I've read calls for a big container port on the Pacific coast (Chile) that would serve all of South America. The continuing blockade of Uruguay's bridges by Argentine protestors also hurts its potential as an intermodal freight center.

Comments:
I guess competition of an atlantic ocean port against a pacific ocean port can only be explained in terms of attracting US products.

Maybe I'm wrong but I don't think Uruguay can compete as an asian port as Chile can't compete as an european port. But I'm not sure, I don't have numbers.

There would really be a competition for US products?

How much does the cost raise when crossing from west US coast to an uruguayan port, and the opposite for Chile. If that cost is not much then you are probably right. Do you have that information? That would be interesting to know.

Great blog, I'm happy you are enjoying the country.

Atlantic vs Pacific is certainly important. The big growth in container traffic has been across the Pacific. The problem for Uruguay, and more generally for this region, is the increased scale of container shipping. The biggest ships have substantially lower costs than smaller ships, but there needs to be a huge volume of freight in and out of a single port to take advantage of the economies of scale.

The AAPA has some interesting statistics at
www.aapa-ports.org

For example: the 5 largest container ports are all in Asia. The only South American port in the top 50 is Santos, Brazil.

Great stuff, Chuck -- thanks! I got quite an education reading your links. I have a new appreciation for the contribution of container shipping. The article on shopper psychology and store layout is fascinating!