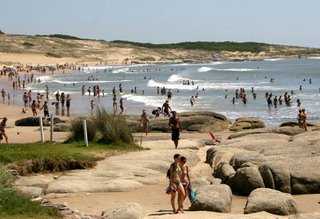 Punta del Diablo in January was much different than it was in November. Instead of a handful of visitors watching the fishing boats unload their catch of sharks, the beach was packed with young people. It seemed like all the hitchhikers we'd seen along the highway had ended up in town. Punta del Diablo had an interesting hippie vibe but it wasn't a quiet fishing village.

Comments:
The picture hit me as weird because everybody was standing.Standing in the water,on the beach,on the rocks.No one swimming laying on the beach or just (Hippie Scene)smoken weed.The waves look big enough for Boogie Boards but I dont see any.Dont think Ive ever seen that at any beach in the world and Im a Beach Person.Please explain what Im missing.
You might like to check out From Uruguays latest entry.Great pics and what appears to be a better beach that they actually use.

It's just how I happened to frame this picture at the surfline. There were many people laying on the beach (to left of what's shown here) and a few people on surfboards (to the right). The water there is shallow, but with big waves, so there weren't many people swimming.

Thanks for clearing that up.But for me there still seems to be alot of standing.

i wondered if you had a chance to see the invasion of bugs on the beaches of p.d.diablo come feb and march...it was really bizarre and gross...any info on these /a name/why only diablo/breeding season...i am searching for all answers!thanks ,lory

Sorry. I haven't heard anything about the bugs.

Just wanted to warn people I spent just one night in punta del diablo (not very nice, been in better) and it was the costliest night of my vacation, while we slept thieves came into the "cabana" and stole two digital camaras, two ipods, and purses (mine and my daughter's) and even a hair brush. While talking to the police the next day we found out we had been one of five other places robbed that night alone. If anyone is thinking of vacationing here, DON'T.

Punta Del Diablo, Uruguay was the worst experience of my life. Its a small town like about 60 people it looked very ghetto and more like a campground. We stayed in cabanas which are mini houses. As we woke up the next morning we had come to the suprize that we where robbed. While we slept the night before they broke into our cabana n robbed us blind. They took my purse, ipod, and digital camera and from my parents they stole my mothers money ipod and digital camera and even her hair brush. If your thinking about going there or Uruguay period don't bother wasting your money. Police don't do much and if they do find the perpatrator the day after the court they get set free and if you shoot the robber thats in your house you go to jail for a long time. What a great country right? Think twice before coming.

Uruguay is a great place, apparently one of the safest countries in South America. I'm sorry you had a bad experience in Punta del Diablo, but don't judge the rest of the country off your bad time.
Don't get me wrong, I think that is is horrible that someone came in and stole your stuff during the night - and the fact that the police didnt really do anything about it only makes it worse.
However, like I said, don't let your bad experience ruin your thoughts on uruguay.
My God, you lost some material possessions. Life is tough sometimes, what can I say?
Uruguay is a poor country and many dont have the luxury of easily affording ipods, digital cameras, and cell phones. Things could be much worse. You are alive, not too mention they even to care to not even disturb your slumber.
I've been studying in Montevideo for 5 months and had 0 problems. Have not been to Punta del Diablo so I cannot speak from personal experience, however, Uruguay is generally very safe, and a little common sense is all you need to make sure your valuables don't get stolen (IE HIDE THEM - not in your bag - or sleep with them)

I spent 6 days in Punta Del Diable on October/November 2008. I had such a great experience. The people I met were friendly and I felt totally safe there. I got to meet quite a few locals too.

It is a great place to visit. If you visit Uruguay (which I highly recommend) you owe it to yourself to see Punta Del Diablo (as well as Cabo Polonio).

There's no reason not to have a relaxing good time in PdD.

I've actually smitten with Uruguay and the people. I'm so glad I went there.

Was there February and March of 2008. Small town, not luxurious, has everything you need if your looking to chill in a laidback community. Found it safe, friendly and welcoming. Rented a 3 bedroom house right on Playa de la Viuda for 85$/night. Have recommended it and will go again in 2010.

I've been there twice many many years ago.
The last time was in 1987, there was absolultly nobody there.
I spent a week naked on the beach with my then girlfriend and I didn't see anybody.
I thought I was in paradise.
It was a pristine desolated place.
Nothing last forever I guess...

I was in Punta del Diablo in 2005, and loved it!!! Found this site as I was asked for advice on where to go in South America. If they find themselves in the area around Uruguay I will make sure to tell them to get their asses to Punta del Diablo. Chilled, beautiful, hippie style community!!!