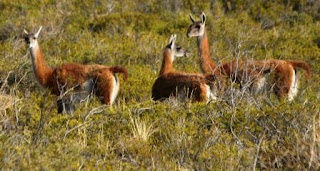 Guanacos, a wild relative of the llama, live in the dry country of Patagonia. Like other members of the camel family, when they are annoyed they spit. We saw several herds in the Península Valdés reserve, but we didn't get close enough to induce spitting.

The Península Valdés has no fresh water but the guanacos have the ability to drink seawater. The people in the area aren't so fortunate. The Welsh immigrants who founded nearby Puerto Madryn only lasted 45 days before relocating to the Chubet River. Today there's an aqueduct to Puerto Madryn and a second under construction. On the peninsula, the estancias pay to have water delivered by truck. Puerto Pirámides nearly matches the guanacos. They use reverse osmosis to desalinate seawater.