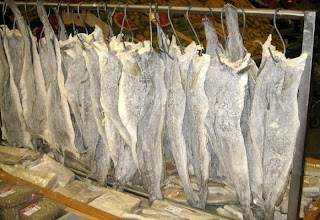 Bacalao, or salt cod, is certainly not my wife's favorite food. As a girl, when she smelled it cooking she would feign a stomach-ache and skip dinner. She still doesn't like it and tries to avoid it whenever possible.

Bacalao is certainly very popular in Spain and Portugal and in their former colonies. Author, Mark Kurlansky suggests that the Basque discovered the Americas long before Columbus, but kept it secret to protect their source of bacalao.

In the store it's hard and dry, so it has to be soaked before cooking. Cooked, I find it inoffensive, but I haven't eaten enough of it to develop a real desire to make it.

I've seen it several times in the last few weeks in Montevideo. I'm not sure if it's the season (Lent and Easter) or if I just happened to notice it more. I don't think we'll be cooking it at home.

The best way to prepare it, by far is a Gomes de Sa http://recipehead.com/recipes/content.phtml?content_id=17878&cat_id=28
I love the stuff!

This comment has been removed by a blog administrator.

Cooking Bacalao feels the air with a "smelly feet" atmosphere. I totally understand your wife.
I remember "semana de turismo"for my trips to Atlantida but not for eating the smelly fish.
Good work Chuck!
your ossie-uruguayan friend

You definetly got to soak it for a day and then change the water it's boiling in a few times, then lots of garlic, onion, and a little tomato paste. Mi Suegra says that I take all of the taste out of it, some Dominicans like it to have a real strong fishy taste. But it's a pretty cheap source of protein here, and I find myself craving it every now and then. There was a Puerto Rican Restauraunt in NYC that I used to go to, that had a really good recipe for it, mixed with rice, locrio.

Still following your posts, your trips, your adventures. Still on hold waiting to unhitch from my current position. Regards, Ken