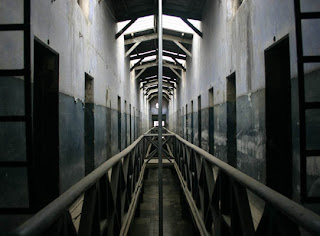 Ushuaia, the southernmost city in the world, began with a prison. At the beginning of the 20th century, Argentina built a large prison to house dangerous felons and political prisoners at the "end of the world". Not incidentally, the development cemented Argentina's territorial claims in Tierra del Fuego. Very few prisoners escaped because there was nowhere to go.

The prison closed in the 1940s and the building now holds the Museo Maritimo, with various exhibits in the small cells. The old prison railway, used to transport prisoners to the nearby forests to cut lumber, has been rebuilt as a tourist attraction complete with workers in period uniforms.

Tourism is now the main industry, with a substantial number of Antarctic cruises leaving from Ushuaia's port.