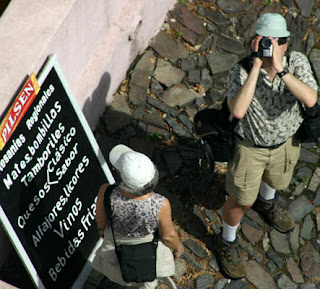 In most Spanish-speaking countries next week is Semana Santa [Holy Week] but here, reflecting Uruguay's strong tradition of separation of church and state, it's called Tourism Week.

School's out and apparently everyone travels. Buenos Aires is a popular destination (although the Argentine piqueteros plan to block all the bridges between the two countries). Others head to the beach; I've heard that it's the only week the campground at Santa Teresa National Park is completely full.

Comments:
The separation of state and church where freedom of religion but also a very strong public schooling system is at the centre of what it means to be Uruguayan today. Uruguay was one of the first countries on earth to brake away from the catholic influence on government and public life. It was also one of the first to introduce divorce laws,womens vote and the eigth hour working day.While other countries on earth are stuck in the "dark ages",Uruguay can be an example of religious tolerance and independence of thought.
good work,Chuck
your ossie-uruguayan friend
P.S. you might be interested to read about Jose Pedro Varela and Jorge Battle,great uruguayans of the past whose thoughts are still relevant today.