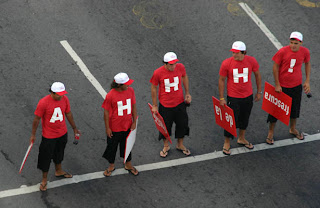 Nearly everyday in Montevideo, I see young people advertising on the streets. Typically they hand out brochures, but sometimes they go beyond that. Before Christmas, Punta Carretas Shopping featured young women in silky bathrobes to promote their special all-night hours.

The guys in the picture were part of the most sophisticated campaign I'd seen. They were at a traffic light near the beach and when the light changed they would enter the crosswalk and each of them would take a drink of Coke. Then they would turn to face the cars and their shirts would spell Ahhh! Then they held up their signs, saying "El lado Coca-Cola de la frescura" [The Coca-Cola side of freshness] all before the light changed. Then they'd go back to the sidewalk and wait for the next traffic cycle.