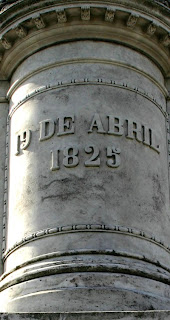 April 19th commemorates the Desembarco de los 33 Orientales when Uruguay's independence fighters, led by Juan Antonio Lavalleja, landed at the Playa de la Agraciada on the banks of the Río Uruguay. Uruguay, after successfully rebelling against Spanish rule, was invaded by Portugal and had been annexed to Brazil in 1821 so the struggle for independence continued.

This date marks an important point in Uruguay's history. It's still celebrated as a holiday, but the actual day of vacation is Monday so people can enjoy a long weekend.

Comments:
If we had remained part of Brazil we would have celebrated 5 world football cups,countless number of world youth championships and we could have claimed to have in our ranks the best formula 1 driver of all times, Ayrton Senna.
Damn it !!!!!