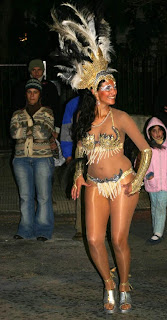 The Llamadas Otoñales, held yesterday in Montevideo's Malvin neighborhood, had candombe drum troupes like the llamadas of carnival, but the atmosphere was much more tranquilo. The parade started in the afternoon and lasted until after dark-- about 4 hours in all.

Like the earlier parades, there were big gaps between groups, but this time I found out why. After the first three groups passed, nothing happened. Since it wasn't crowded, I strolled to the beginning of the parade route. I expected to see other performers getting organized, but there was basically no one there. Eventually a few drummers appeared and made a little fire in the street to tune their drums. Gradually more and more people appeared until three entire troupes were gathered. Groups were scheduled to start every half hour or so, and there were gaps after each set. I guess it gave spectators a chance to drink mate and chat with their companions.

While it was pretty cold for costumes primarily consisting of beads and feathers, everyone seemed to be having fun.

Here's a video of the event: