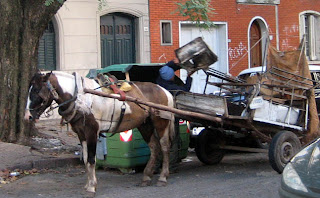 Montevideo is a large modern city yet in every neighborhood you can hear the clip-clop of hooves on pavement. While the city's official recycling system gets little use, scavengers with horse-drawn carts recycle an extraordinary amount of material. A newspaper account said over 65% of the Ciudad Vieja's garbage moves by horsecart.

The scavengers make their rounds of the neighborhood dumpsters collecting all the recyclable materials. They gather huge bags of plastic bottles, bales of cardboard, and everything else that could possibly have value.

I'm told that years ago horsecarts were part of the official garbage collection system but the city government replaced them with a modern fleet of garbage trucks. Without other income options, the collectors continued on their own. When Uruguay suffered its economic crisis, more people entered this sector.

The horsecarts add a certain charm to Montevideo, but they complicate traffic and some scavengers leave mounds of garbage on the sidewalk after they've taken the recyclables. I feel sorry for the people, particularly the children, who earn their living in dumpsters.

Comments:
People feel sorry for them, but I don't. They are actually self-employed entrepreneurs who make money literally with our garbage and help the environment at the same time. To me, they are heroes.

It's easy to separate what's recyclable and give it to them directly, so they don't have to "dumpster dive." Yet I don't know many other than Pati and I who actually do it. And in Pocitos it's super easy. They are everywhere. Out here in Solymar, they are more difficult to find.

By the way, the Montevideo recently started a new recycling program (the at campaign you mentioned is part of it.) They give you orange-colored shopping bags at the supermarket, which you are supposed to put in your recyclables before throwing the bag in the dumpster. The recicladores then pick the bags without having to dig around too much. It probably could have been thought out better, but it's a step in the right direction.

These guys were politically convenient for the current government when they were in the opposition, so they would point out "poverty is the consequence of the 'traditional parties' government, blah blah blah". Now they've been in office for more than 2 years, and they've done NOTHING. Added to that, they've been in office in the city of Montevideo for 17 years, and NOTHING.

I don't know wether "these guys" were convenient or not for this governmentbut....when this government was elected more than 40% of thetotal population was living under the line of poverty.
By the end of 2006 poverty has been reduced to less than 19%.
Still there are many problems and lot of things to do but Uruguay is moving in the right direction.
Let's be more positive.

Congratulations Chuck and thanks for this Blog, I really enjoy it.
Ricardo

I'd say that given the Leborgne case, and the fact that in my office I just can not get a rise becase of the only raise we get is the one from the "consejo de salarios", no matter how hard you work, or how many leads you bring, or how many projects you end successfully, or the "trains" we've lost, both in recent history or in the last decade, the parent comments are at least, arguable.

But I guess that foremost, this is not the place for such arguments, and Chuck has done a great work on this blog to reflect life in uruguay as to make it a sad host of local political debate and/or propaganda. Let's try hard to keep it that way.

@ solymarciano. The real heroes are those poor horses.