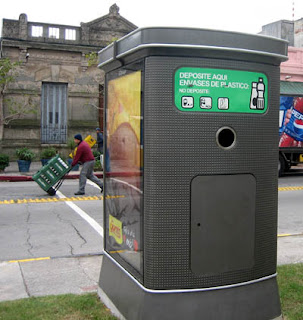 Montevideo's municipal government installed recycling stations throughout the city. There are separate collection boxes for glass, plastic, paper, metal, and batteries. All of them have space for paid advertising on the sides.

The system is somewhat flawed since the boxes seem randomly distributed throughout the neighborhoods. So, for instance, the one recycling box near our apartment accepts only batteries. As a result, I've only recycled two AA batteries since coming to Uruguay.

I don't think I've ever seen anyone deposit anything into the collection boxes, so I'm not alone in abstaining from the official recycling system. There is another, informal system that recycles a substantial amount of Montevideo's trash. I'll post soon on recycling-- in practice.