I was a bit concerned since our budget for the year is based on the idea that Uruguay will be cheaper than Kalamazoo. My Spanish wasn't strong enough to really understand the details of the article. My wife, who is fluent, read it and she thought the economics concepts weren't defined clearly, so it was difficult to interpret the article. I found this English version (First Results of the International Comparison Program in South America - Household Consumption in 2005) and I have to agree: it's the economics not the language that's giving me trouble. I'm not sure I should feel good as a novice Spanish speaker, or bad as an experienced economist.

In trying to interpret the article, I did find something more comforting:

If Montevideo is one of the cheapest cities in the world right now, I guess I don't need to be too concerned about its relative ranking in South America.

On the streets of Montevideo 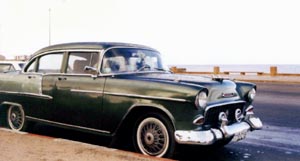 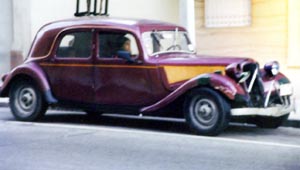 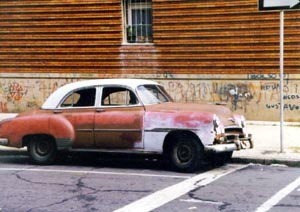 These weren't show cars, but regular means of transportation. (Summer 1998)