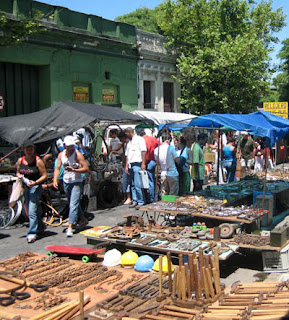 It'd been a while since I'd visited the Feria Tristán Narvaja, so when some friends invited me to go, I was happy to join them. I didn't really need anything, but it's fun to see the mix of antiques, fruit, counterfeit DVDs, posters, tools, books, old clothes, live animals, and miscellaneous junk. We even saw copies of Microsoft's soon-to-be-released Vista software for sale.

I wanted to take a video of a shell game I saw there, but the swindlers didn't like that much. Later, we passed a small group of guys singing murga, and I decided to feature them in this short video: