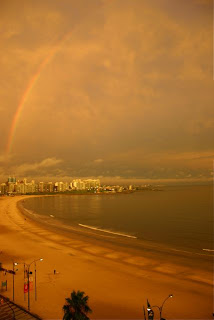 In Michigan, January and February mean lots of snow and this year has been no exception. It's been great for cross-country skiing and my daughter enjoyed several days off school because of snowstorms. In Uruguay, January and February are beach time. I must admit that when the temperature dropped below 0° F (-20° C) my thoughts turned south to summer on the Río de la Plata.

Here's a video slideshow of my photos from the beaches of Uruguay. From Montevideo to Punta del Este to Punta del Diablo: 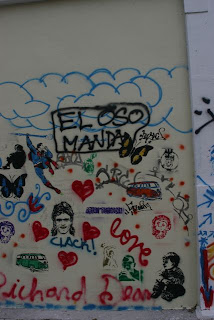 Montevideo, like most big cities, has its share of graffiti, mainly indecipherable scrawls on dumpsters, houses, and statues. Our Uruguayan friends told us that graffiti became much more prevalent after the economic crisis of 2002.

As an economist, "The economy is the cancer of the world" caught my eye, but even more striking was a conversation, of sorts, painted along the wall of Pocitos beach. An exuberant Christian had painted several city blocks of the wall with a stream of religious statements in bold letters. An atheist had responded to every saying with cursive spraypaint, so walking along the beach, it read "GOD LIVES" "inside your stupid head" and a dozen more couplets.

Other graffiti was spray-painted support for soccer teams (Peñarol and Nacional being the most visible) or rock bands (many US and European groups from various decades). Some of it was political, either party slogans or independent outcry. And some were declarations of love or simple declarations of the writer's existence. There were two genres of artistic graffiti, over-sized NYC-style paintings and smaller, and often more interesting, stencil work.


Here is a video slideshow of my graffiti photos from Montevideo: 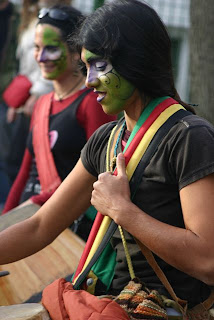 Last year, during carnaval season, one of my readers commented that I would miss it once I left Uruguay. That prediction was certainly accurate; I miss it all.


With nostalgia, I put together a video slideshow of photos from last year's carnaval.