Anthony Bourdain, chef, author, and TV star was in Uruguay a few weeks ago to film a segment of his Travel Channel program, "No Reservations". He visited an estancia with friends of mine where they shot a scene for the show. My friends and one of the show's producers emailed me & said it was a great day.

Another friend sent me a couple of interesting Bourdain quotes from the "Galería" magazine of Monetvideo's news weekly,"Busqueda".

I've translated his comments on food in Uruguay as best I could. The English to Spanish to English translation undoubtedly is a weak reflection of his original statements, but I hope you'll get the idea. I've included the Spanish version, below. 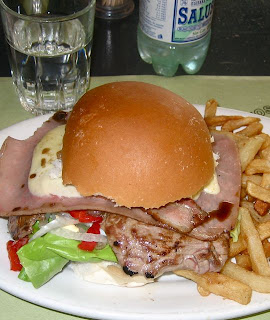 Anthony Bourdain: “The first thing I need to talk about is the chivito, because it’s the best sandwich I’ve tasted in my life, including the venerated & thousand times described pastrami sandwich of New York and the mortadella and cheese sandwich from the market of Sao Paulo, Brazil. Really, the chivito is too good to be true; it’s almost impossible to eat because of how tall it is. Moreover, the idea of putting together beef, bacon, ham and cheese in the same bite, without counting all the other things it contains, is incredible. What’s more, in the US you could be arrested for daring to eat something like this. For me, any country that embraces this as its national sandwich is great!" 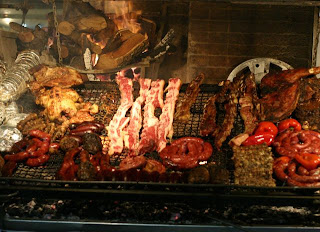 He continues, “Today at noon we went to the Mercado del Puerto. I swear that in this city I ate more meat than I’ve ever eaten in my life. In the parrillada they served us an enormous brazier with five pounds of meat—with sausages, blood sausage, sweetbreads, lamb, asado—and didn’t stop until I finished it all. In Uruguay, they have the best blood sausage, better than the French and whatever other I have tasted, particularly the sweet. I tip my hat to societies like yours that don’t pay attention to cholesterol and the crazy idea of healthy eating. Even more, when I don’t see anywhere the @#$% fast food chains like Burger King, Starbucks, Chicken McNuggets, or Wendy’s. All that I see speaks well of the country. I like countries that aren’t in love with American fast food."

The Uruguay episode of "No Reservations" is scheduled to air sometime this summer or fall (Northern hemisphere seasons). I'm looking forward to seeing it.

Comments:
It's coming, though. As surely as the rain, American food and "lifestyle" are coming.

Although a great fan of Bourdain, I was not very happy with this program. In the cities, it showed the shabbiest less sophisticated side only. The countryside was fine, and if he wanted to show the primitive, native side, I understand, but he gave the wrong impression,perhaps trying to confirm his own prejudices or trying to be original.
First, Uruguayans are 80% urban.
Second, why show the poorest urban sites (Barrio Sur)and even those, not at their best? Only .1% of population is of African origin, yet their music (Candombe) is something we are all proud of, but show it in earnest during the great display they put on at Carnaval!Not three 12-year olds dancing on the dirty street!
Does Bourdain show the shabbiest side of Barcelona or New York in this programs? Why do it here?

I agree about the Chivito. The best was Marco's Chivitos, a small chain in Montevideo. As far as Maria's comments about the shabby areas, there's plenty of them but the wealthy Uruguayans ignore and avoid those areas, just like people do everywhere. Montevideo and other places are beautiful, but be careful.

Maria, often times the best foods are found in the shabbiest and most shady areas of cities. Usually the best, most popular, and most delicious food is found in these places. All good food does not have to come from sophisticated, high-end restaurants and ritzy parts of town. Some of the best-tasting foods come from lower income parts of cities. Take the Chivito for example. A cheap, easy-to-make, high-protein sandwich that doesn't have to be served in a fancy restaurant. It is one of the most delectable sandwiches on the face of this earth and it is pretty much a street food, like a Philly Cheesesteak in Philadelphia. Don't be so disappointed about the show. We all know that Uruguay isn't a @#$!-hole and that's what really matters.

well, if he liked the 'chivito', he must try the 'francesinha' in Oporto, Portugal. I just saw the episode yesterday and I became very curious about Uruguay. What I know about the country is that they have a powerfull rugby team (uruguay-portugal in 2007 for the RWC).
Nice country to visit. Regards.

I really agree with most of the comments already posted. But, as Uruguayan, I must also point out that the CHIVITO is not our national dish. In fact, ASADO could have that title.
Ana.

I completely agree with all the comments made about the programme. About the Chivito, I can add that was invented in the 40s by a businessman in his restaurant in Punta del Este.