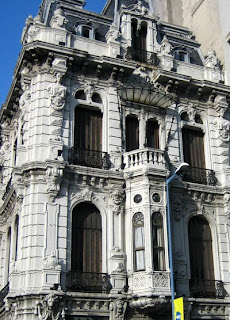 The Museo del Gaucho and the Museo de la Moneda occupy separate floors in the same late-nineteenth century mansion in Montevideo's Centro, so you get two museums for one price-- free. Both collections are fairly small but interesting.

The gaucho museum showcases the elaborate silverwork used by the caballeros on saddles, belts, knives, whips, and bridles. It also displays weapons, mates, canteens made from horns, and traditional clothing of the countryside.

As an economist, I was fascinated by the display of currency from the early 1990s. Those bills looked just like the ones in circulation today but they had a lot more zeros: today's 20 peso note was 20,000 nuevo pesos at that time. All the bills kept the same design: colors, portrait, artwork but with three fewer zeros. Another display case had currency from the 1970s before the introduction of the nuevo peso-- and again those bills had an extra 3 zeros. My favorite was this one where they changed a 5000 peso note to a 5 nuevo peso note using a rubber stamp.

As a result of these currency changes, today's 1 peso coin represents one million old pesos. This made the old pesos (through the 1970s) and the nuevo pesos (through the early 1990s) essentially worthless. (I have seen people use them as chips when playing truco and the Almacén del Hacha has jars full of them as decoration.) Why? Uruguay, like other countries in the region, experienced runaway inflation.

If you're not interested in money or gauchos, you might still enjoy visiting the museum to see the elaborate housing that Uruguay's elite enjoyed a century ago.

Comments:
I pass in front of it everyday, but I've never been there though. I don't know but the thought of it doesn't cross my mind, maybe it's from having lived here all my life. It's the type of visits kids at school do, I don't know.

Now, if you think it's worth it, I may visit it.

About the runaway inflation you talk about: That also seemed to happen in neighboring Argentina and Brazil: Argentina comes to mind with the "Austral Plan", and Brazil had the "Cruceiro", then the "Cruzado", then a "Plan Real I" and then a "Plan Real 2", IIRC. I wonder if the timing was similar, and if that runaway inflation were "related", such as in the 1999-2002 crisis in Brazil-Argentina-Uruguay. If that's the case, and assuming that in all cases Uruguay got carried with the flow, is there anything Uruguay can actually *do* to prevent that in the future? What are the options?