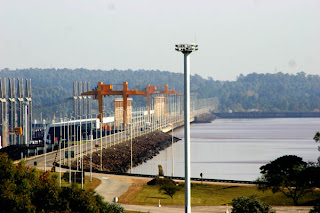 The Represa Salto Grande is a dam on the Rio Uruguay just north of Salto. Construction of the dam, a joint Argentine-Uruguayan project, started in 1974 and was completed in 1979.

We didn't have time to take the guided tour to see the hydroelectric generators inside the dam, but we drove across it into Argentina. (Both Uruguay's and Argentina's Customs facilities are on the Argentine side of the river now, so it's possible to cross the bridge without going through Immigration.) Argentinian protesters, who have closed the southernmost bridge between the countries for nearly two years, only occasionally block the bridge at Salto.

The huge reservoir behind the dam in known as Lago Salto Grande.