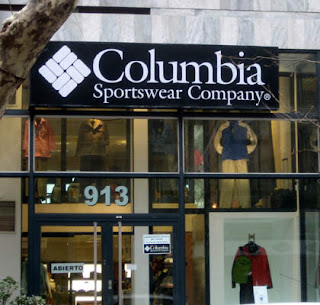 A few months ago I posted on the difference between prescription drug prices in Uruguay and the United States. Here's a different example:

I wear a lot of casual clothes from Columbia Sportswear. They're durable, relaxed, and good for camping and traveling. In the US, I can buy a pair of Columbia pants for about $30 at Kohls. In Montevideo, there's a Columbia store right around the corner from my apartment. Same rugged outdoor clothing, but the prices are different. Instead of $30-$40, the pants cost $90 or $100.

Why such a big difference? Part of it is taxes. In Michigan the price doesn't include sales tax, so I could add a couple of dollars to adjust for that. Uruguay's IVA is higher, so it probably accounts for $20 of the price differential, but that still leaves a 100% difference. Why?

Production costs won't explain the difference-- the clothes are imports to both countries. We could look at differences in demand. But here the story becomes less simple, why charge a substantially higher price in a poorer country?

I'd suggest it has to do with an absence of competition. In the US, Patagonia dominates the high-end outdoor clothing market but they have little presence in Uruguay. That lets Columbia re-position itself locally to become the luxury outdoor brand. Rather than compete against LL Bean and Woolrich in the middle-price market segment like they do in the US, they hope to command a premium price in Uruguay. Will it work? I'm not sure. I don't see a lot of traffic in their boutique, but their pricing would allow them to profit on low volume.

Would I pay $100? No, I'm not that loyal a customer. But if I were staying here longer, they might be a pedido.

Comments:
Well... I don't know much about economy, but the obvious thing that comes to my mind is the size of the market. In US, a shop like that would sell much more because there are more customers and with better income; that could allow them to bring down the prices as much of the cost is fixed.