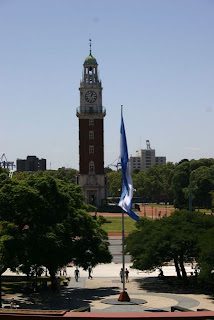 Although Montevideo isn't far from Buenos Aires, we didn't make the trip across the Rio as often as I expected. We did visit the bigger city a couple of times (and flew in and out a few more.) It's an interesting place.

Here's a video slideshow of some of my photos from Buenos Aires: 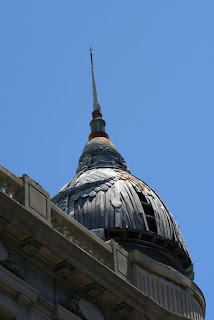 Living in Uruguay, it was easy to see traces of its past: architecture from previous centuries, colonial fortresses, and antique cars still in use. Some are a bit worn, others in states of decay, and others fully renovated. In any state, they were interesting reminders of Uruguay's history.


I made a video slideshow of photos of artifacts from Uruguay's past. You can see it here:

In an earlier post, I mentioned chef Anthony Bourdain's visit to Uruguay. Since then, I've heard a few bits and pieces about his trip, including a mishap with an armadillo that I don't fully understand. (I guess I'll need to wait and watch the show.)

In my post I included quotes from Bourdain that had been translated twice (into Spanish by Busqueda and back into English by me) losing, no doubt, accuracy each time. To make up for that, here's a quote from a Miami Herald article about Bourdain:

``I was just in Uruguay. It was one of those great discoveries. Montevideo is outrageously cool. I ate meat for breakfast, lunch and dinner. I don't think I saw a single vegetable for 10 days. Everything is cooked over roaring heaps of wood. They are burning down the whole world to feed themselves. I had armadillo. Hadn't had that yet. And some emu/ostrich varietal. But the big surprise was how good the blood sausage was. Maybe the best morcilla I ever had.''

But how good was the steak?

``It was better than I had in Argentina. People say the beef in Argentina is great. I prefer American beef to Argentine beef. But everything I had in Uruguay was unexpectedly great.''

And here's a direct quote from Tony Bourdain's blog without any intermediation:

URUGUAY: The Bourdain brothers journey to Montevideo, Punta del Este and the surrounding countryside in search of traces of their mysterious, Uruguayan great, great grandfather. Conclusions? Among other things--that Uruguay makes Argentina look like a vegan suburb of Berkeley. That they like to cook stuff over flame. LOTS of flame. That Montevideo is probably the Next Big Thing--or should be. And that the "civito" is the Greatest Sandwich in the History of Civilization.